Xi Jinping, China’s leader, has collided with economic reality. His crackdown on private enterprise has been a significant drag on the economy. The most vulnerable sector is real estate, particularly housing. China has enjoyed an extended property boom over the past two decades, but that is now coming to an end. Evergrande, the largest real estate company, is over-indebted and in danger of default. This could cause a crash.

The underlying cause is that China’s birth rate is much lower than the statistics indicate. The officially reported figure overstates the population by a significant amount. Xi inherited these demographics, but his attempts to change them have made matters worse.

One of the reasons why middle-class families are unwilling to have more than one child is that they want to make sure that their children will have a bright future. As a result, a large tutoring industry has grown up, dominated by Chinese companies backed by US investors. Such for-profit tutoring companies were recently banned from China and this became an important element in the sell-off in New York-listed Chinese companies and shell companies.

Xi does not understand how markets operate. As a consequence, the sell-off was allowed to go too far. It began to hurt China’s objectives in the world. Recognising this, Chinese financial authorities have gone out of their way to reassure foreign investors and markets have responded with a powerful rally. But that is a deception. Xi regards all Chinese companies as instruments of a one-party state. Investors buying into the rally are facing a rude awakening. That includes not only those investors who are conscious of what they are doing, but also a much larger number of people who have exposure via pension funds and other retirement savings.

Pension fund managers allocate their assets in ways that are closely aligned with the benchmarks against which their performance is measured. Almost all of them claim that they factor environmental, social and corporate governance (ESG) standards into their investment decisions.

The MSCI All Country World Index (ACWI) is the benchmark most widely followed by global equity asset allocators. An estimated $5tn is passively managed, which means that it replicates the index. A multiple of this amount is actively managed, but it also closely tracks the MSCI index.

In MSCI’s ACWI ESG Leaders Index, Alibaba and Tencent are two of the top 10 constituents. In BlackRock’s ESG Aware emerging market exchange-traded fund, Chinese companies represent a third of total investments. These indices have effectively forced hundreds of billions of dollars belonging to US investors into Chinese companies whose corporate governance does not meet the required standard — power and accountability is now exercised by one man who is not accountable to any international authority.

The US Congress should pass a bipartisan bill explicitly requiring that asset managers invest only in companies where actual governance structures are both transparent and aligned with stakeholders. This rule should obviously apply to the performance benchmarks selected by pensions and other retirement portfolios.

If Congress were to enact these measures, it would give the Securities and Exchange Commission the tools it needs to protect American investors, including those who are unaware of owning Chinese stocks and Chinese shell companies. That would also serve the interests of the US and the wider international community of democracies.

SEC chair Gary Gensler has repeatedly warned the public of the risks they take by investing in China. But foreign investors who choose to invest in China find it remarkably difficult to recognise these risks. They have seen China confront many difficulties and always come through with flying colours. But Xi’s China is not the China they know. He is putting in place an updated version of Mao Zedong’s party. No investor has any experience of that China because there were no stock markets in Mao’s time. Hence the rude awakening that awaits them.

Letter in response to this article:

Thu Oct 7 , 2021
Rep. Alexandria Ocasio-Cortez appeared to criticize Sen. Kyrsten Sinema in a tweet on Saturday. The tweet came after a report suggested Sinema wanted to be a “maverick” like Sen. John McCain. Ocasio-Cortez said there “isn’t anything maverick” about protecting the rich over working families. Loading Something is loading. Rep. Alexandria […] 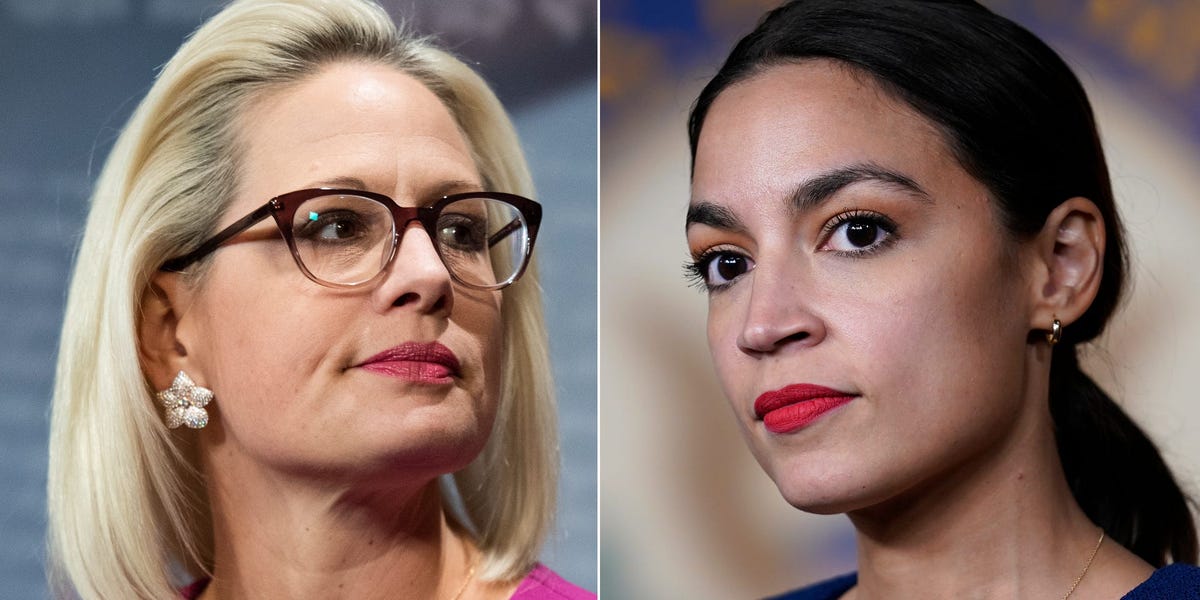